Here are some things that I wish I knew at the time I needed them.  Maybe they will be helpful to you.

We’ve got a 12 year old cedar deck that I’ve cleaned and refinished every year with an oil-based clear deck sealer from either Behr or ACE Hardware.  Well, it got darker and dirtier every year until it looked like this: 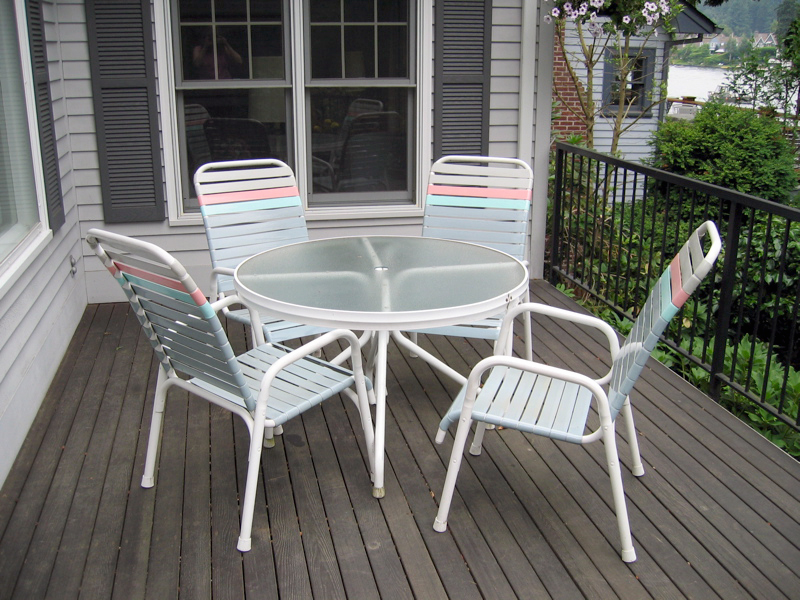 Recently, I found Messmer’s Wood & Deck Cleaner, Brightener and Sealer.  These are great products (as you can see from the photo below).  But, the problem is how to remove 12 layers of old oil-based deck sealer.

I tried sanding, but this doesn’t get into the cracks and the sander runs into the deck screws.  I tried paint stripper, but this didn’t work either.

It was Clorox Outdoor Bleach (from Home Depot) that finally did the trick.  We applied it by wetting down the deck, pouring a small amount of bleach into a small container and then using it with coarse steel wool.  This of course requires a rubber suit, gloves and goggles.  We rinsed the deck using a pressure washer running on half power, with a wide nozzle.   After two applications of the bleach, the deck looked like bare wood again.

At this point, we used the Messmer wood cleaner and brightener as directed on the containers.  After everything was dry, we applied Messmer’s UV Plus. 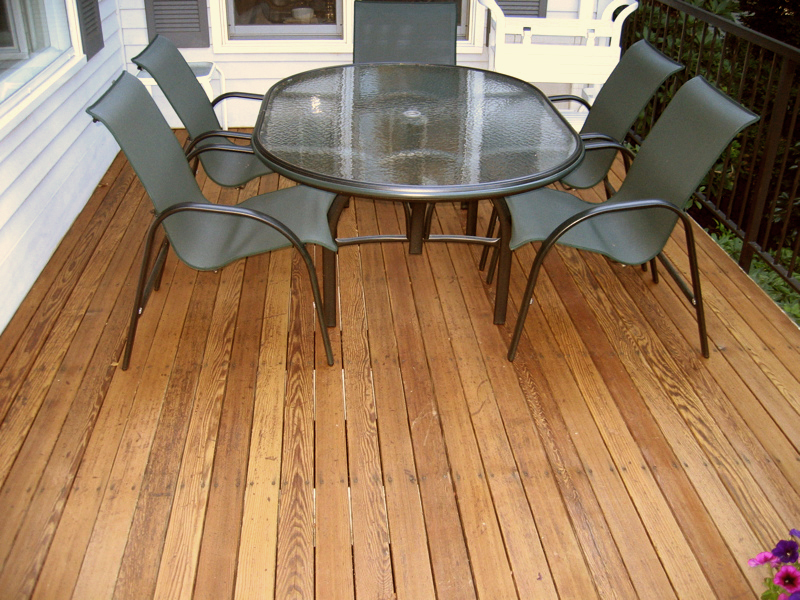 This is what the deck looks like now.  We cleaned it again in the fall as suggested by Messmer and it keeps looking just like this picture!  It’s now 2011 and the deck still looks like this after I use the cleaner, brightener and sealer.

For two years, I suffered with performance issues on my DeWALT DP2800 pressure washer.  It has a Honda GX200 6.5HP engine.  The typical symptom is that it runs fine for an hour or two and then stalls.

I talked to folks at a garden tool supply store and they convinced me that I had a plugged carburetor (due to old fuel or ethanol issues).  Several times, I took the carburetor apart, cleaned it and found that the pressure washer would then run at full power for about two hours (3/4 tank).  I even bought non-ethanol fuel at a marina, but it didn’t help.

One time when it stalled, I removed the carburetor bowl and noticed that it contained no fuel.  I then removed the sediment trap and saw that it also had no fuel.  I took the gas cap off to make sure there was gas in the tank and the fuel started to flow!

The pressure washer has been running great ever since.

Send me a note if you’ve had the same problem.  A friend of mine convinced himself that the machine was overheated and needed a rest — because it worked again the next day.

We’ve got a GE over-the-range microwave that started acting up.  The controller would crash during the cook cycle with none of the buttons or touchscreen working.  Cycling the power would make it work again for a day or so.

I first unplugged and replugged all the connectors to the two main circuit boards.  This made it work for about a week and then it went back to randomly stopping during the cook cycle.

The permanent fix was to replace both circuit boards — cheaper than a replacement microwave and a lot less work.  I bought the circuit boards from Appliance Zone and they arrived the next day.

Here is the procedure for replacing the Controller and Relay boards.  Start by disconnecting the power and then:

Remove the two screws on the top of the microwave.
Slide the fan cover left and pull out.

Remove the screw a the top of the touch-pad assembly.
Lift the touchpad up and out.

The microwave has been working well for over six months.  So, it was worth spending the money on the replacement boards.

Stand Up Paddle Board Rack