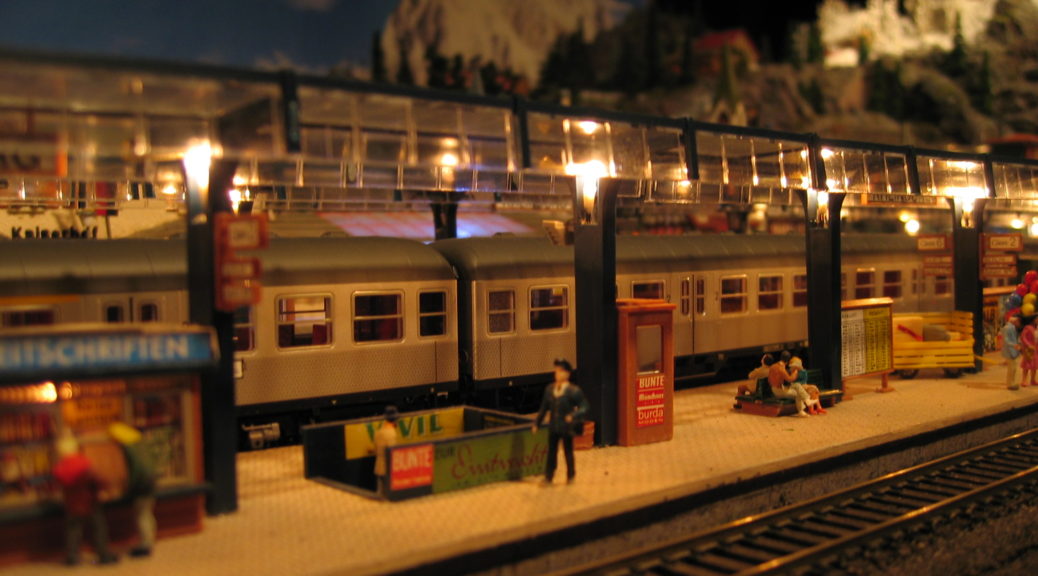 I have an L-shaped HO layout that’s about 12 feet on each side.  It’s a European theme that’s roughy Epoch III (1945-1970), but I’m willing to cheat if it pleases me.  It mainly consists of equipment from Fleischmann, but I have some Roco as well.  The buildings are from Faller, Kibri, Vollmer and other European manufactueres.  Signals are from Viessmann.  I also have the Faller Car System (cars that really drive around), which impresses most visitors more than the trains.

The layout is automated and I can run up to 10 trains.  The automation is done with a “block system” that’s similar to what the prototype railroads use.  That is, sections of track are either occupied or free and control the signal at the entrance of the section.  The control is done with relays and simple electronics.  Computer control would of course be simpler, but since I write computer software for my job, I don’t want to write software for my hobby as well.

Here is a composite view of my layout.  This is built in Photoshop Elements to create the next two images for documenting the track and Faller Car System sensors and servos.

View of the tracks, sensors and electrical connections/breaks.  This image cuts the mountain away to show the tracks and controls.  The previous image shows the mountain in tact.

Most of the logic is controlled by relays, Tortoise switch machines and a few dozen transistors.  If you’re interested, I can send you the spreadsheet that describes the state machines.

There is a “hidden station” below the layout, which is not shown.  It is accessed via the left curved turnout by C58.

Faller Car System roads, sensors, switches and “stop” controls.  On a good day, I can run 7 vehicles.  The previous image shows the mountain in tact.  This image cuts away the mountain to shows the roads and their controls.

The logic is controlled by several hundred transistors and several dozen relays.  If you’re interested, I can send you the state table spreadsheet that describes the traffic control.

Most of my track is code 100 to accommodate Fleischmann engines and cars from the 1960’s.  The relatively large flanges on their wheels won’t run over Atlas code 83 track.  However, I have some code 83 track from Tillig and Roco which works fine.  I started with a lot of brass Fleischmann track that I had from the 1960’s, but it’s a real nuisance to keep clean.  The nickle-silver track stays much cleaner.  To help keep the track clean, I have both an engine and a freight car with rotating track cleaners (Fleischmann 4938 and 5568).

Also, most of the American-made rolling stock will derail on the frogs of the older Fleischmann turnouts.  When I carefully compare a European wheel with an American one, the spacing on the American wheel flanges are about 1/64th inch closer together!  I thought there were standards for this sort of thing!

Over time, I’ve replaced most of the track with Peco Streamline Code 100 turnouts and crossings.  These are absolutely derail proof!  Atlas curves and flex track work great for the rest.  The Tortoise “Slow Motion Switch Machine” from Circuitron (P/N 800-6000) work really well for controlling the turnouts. They are reliable and have a DPDT switch which can be used to control track and the frog power. The Electrofrog on the Peco turnouts requires strategically spaced insulators.  The Roco turnouts have the insulator built in, which I think is very clever.  The curved turnouts from Tillig are a bit flexible, which is a terrific feature when adding to an existing layout.

I don’t recommend Atlas turnouts.  These require some filing and cursing to get older Fleischmann engines to negotiate them.  It’s mainly the wheel spacing issue I mentioned above.  I also can’t recommend Shinohara turnouts.  I’ve got one of these, but it occasionally needs to get mechanically wiggled before the Tortoise motor will move it (not the Tortoise’s fault).Motors

The modern Fleischmann and Roco engines behave extremely well.  Some of the Fleischmann models from the 1960’s with the round-magnet motor also work well, but others run too slowly for the first few minutes (while they are cold).  The round-motor engines which have extra gears behave well both hot and cold (e.g. Fleischmann 1364).  Even the square magnet motor in my Fleischmann 1367 Union Pacific Engine runs well because it is geared low.

I’ve tried three approaches to get the older Fleischmann engines to behave:

I added an extra gear to this Fleischmann 1379: 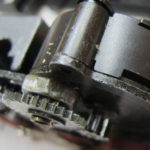 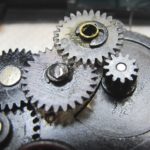 Once a year or so, the motors and gears need to be cleaned.  Here’s how I do it.

Reliable couplers are a real problem.  Fleischmann couples are good for the close coupling mechanism on all the newer European engines and cars.  It’s a solid connection that lets the engine pull or push. But, they occasionally uncouple when they are not supposed to, especially on longer passenger cars.  The best solution is to use the Roco 40271 couplers, whch don’t unintentionally uncouple.

Kadee couplers have worked the best for me on old Fleischmann engines and dual axle cars — without NEM coupler sockets.  They look good and don’t uncouple when they are not supposed to.  Kadee couplers are uncoupled by mounting an electromagnet under the track.  For a while I thought the Kadee couplers would work well everywhere.  But, they don’t allow an engine to reliably push a long train around a curve.  Also, the buffers can get tangled up on long 4-axle passenger coaches if a train slows down or stops in a curve.

Here’s how I install Kadee #39 couplers in a 2-axle freight car (Fleischmnn 1460).  I know this is different from what  Kadee recommends, but it puts the coupler at the correct height.

I’ve had the best luck ordering from Euro-Modellbahn in Germany.  They’ve got just about everything in stock and can get unusual items like spare parts quickly.  The orders arrive in a single shipment and are correct.

Here are some independent suppliers that I’ve enjoyed buying used Fleischmann and Roco from:

I can’t recommend Reynauld’s Euto-Imports because I can’t tell what’s in stock and what’s not.  Two times I’ve been told via e-mail that an item is in stock and it magically is no longer available when I order it.  I tried them again last spring and the Roco engine that they told me was in stock is still on backorder nine months later!  Ordering 5 items will add 3-4 shipping charges to the order.

Walthers has a great web site which shows what’s in stock, but they have very high prices.

Fleischmann spare part numbers can be found at the Fleischmann home page.